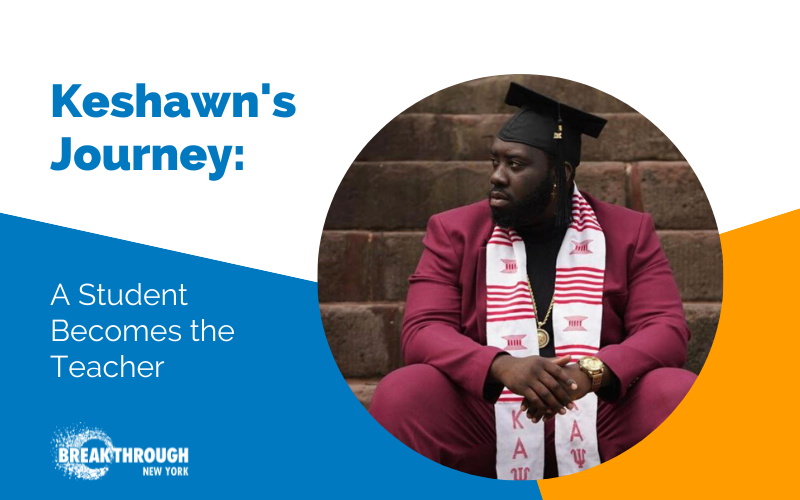 The alum discusses how the college success program provided a unique teacher-training guide.

When students enroll in Breakthrough New York as 6th graders, they are often at a pivotal moment in their lives. They are developing study habits to set them up for success in school, while at the same time discovering their talents, skills, and visions for the future. For Breakthrough alum Keshawn, he did not fully grasp the scope of all that the program could offer him until he stepped into a classroom, and realized that Breakthrough had been fostering his passion for education for years.

As part of the middle school program, Keshawn participated in rigorous academic classes and received individualized coaching in applying to high schools, two activities he said prepared him well as he thrived at the boarding school Northfield Mount Harmon in Massachusetts. Having never considered boarding school before, he credited Breakthrough for introducing him to the opportunity that would lay the groundwork for college and his career.

“You might not know what you want to do, or where you want to be, but [Breakthrough] is an opportunity that is going to help you get to wherever you want to go,” Keshawn explained.

Breakthrough’s influence did not end after high school. While attending Dickinson College in Pennsylvania, Keshawn began volunteering as a reading tutor for 5th graders and instantly fell in love with the work. Although it was a rewarding experience, he also faced the unfortunate reality that not all teachers have enough faith in their students to challenge them with level-appropriate material; as a result, he was inspired to pursue a path to become an equity-minded educator, and be the resource that students sometimes lack. Through Breakthrough’s model of near-peer relationships, Keshawn returned to the program as a mentor for 9th and 11th graders, as well as a two-time summer teaching fellow; these experiences further strengthened his tools as an educator, and instilled in him a commitment to serving his community. For him, his motivation was personal.

“When I was at Breakthrough, there weren’t that many Black men that we had as teachers, and I’ve always been aware of that in my journey in education,” Keshawn revealed. “This is a space where I felt that I would have benefitted from seeing a Black man in college as one of my teachers, especially one [who’s] from where I’m from.”

Keshawn is making this ambition a reality as a teaching resident with Urban Teachers in Dallas, co-teaching 9th and 10th grade English while earning his master’s in education from Johns Hopkins. In reflecting about his future plans, Keshawn considers the different paths that he could take, such as a policy maker or principal—but the one belief that remains is his desire to effect meaningful change on whichever scale he is working. He summarizes his experience at Breakthrough by saying: “This is a program that grows educators. I still use a lot of the skills I learned [here] in my practice. Breakthrough is partially responsible for everything I have in my life right now.”