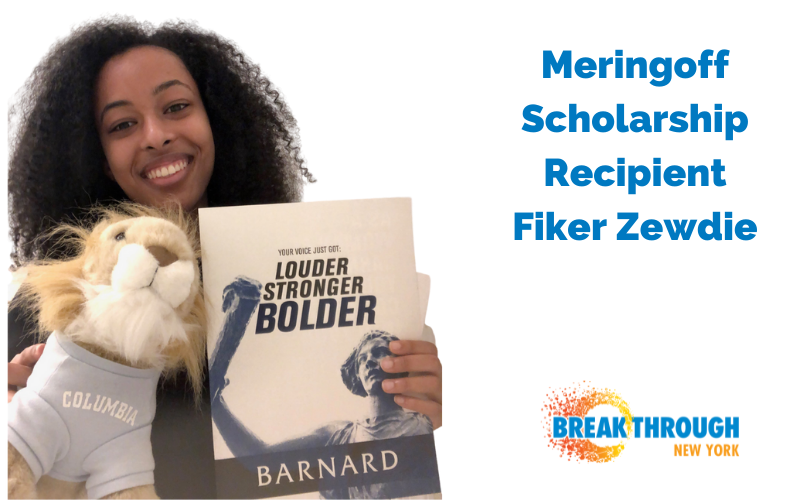 Breakthrough New York is proud to announce their two Meringoff Scholarship recipients: Fiker Zewdie and Henderson Alcantara. Both students submitted an essay regarding their experiences at Breakthrough and how the organization affected their educational trajectory. We’re so excited to celebrate them.

How has your experience with BTNY prepared you for life after high school? This is your essay, told in your voice. If you’re looking for a way to get your mind warmed up, close your eyes and imagine the first day you began at BTNY. What was the difference between your life on that day and your life today?

When I began my BTNY journey, I was a middle school student with a limited understanding of success. I remember being a naïve middle schooler ready for a summer of programming and games. Little did I know that I would meet the people who would help me narrow my interests and broaden my horizon academically. I’d only been exposed to the idea of pursuing more conventionally celebrated career paths, but Breakthrough had solidified my innate love for learning by celebrating my presence in the classroom and investing in the power of mentorship. I connected with other students my age from the Bronx and found that we all had the same goal to “succeed”, but only until we met Breakthrough did we understand how to get there. Breakthrough piqued my interest in climate and journalism after taking me to tour the studios of NY1 and speaking to the meteorologist who described his daily routine. My learning extended beyond the classroom and I was acquainted with college students who didn’t define us by our shortcomings but cheered us on during summer programming while teaching us the basics of the following year’s content. Those very teachers (among which many were BIPOC) educated us about the endless possibilities for schools across the country through their “college knowledge” spiels and I instantly retained it. Over the course of my high school experience, my subconscious memories pulled me back to think of the students who looked like me and what I could potentially become. For the first time in my life, I resonated with someone’s successes and I took it to heart.

As I matured in my early beginnings in high school, I maintained a steady relationship with Breakthrough staff and heard the testimonials of different mentors who spoke on their experiences as college students in New York. A little later on, I began my sophomore year research project at NASA GISS, directly applying the information taught during our “Super Saturday” networking crash course to connect to a research mentor. I had virtually nothing impressive to bring to the conversation as a 16-year-old besides my determination. Breakthrough gave me the mental preparation to confidently pursue climatology research, a field where Black women are underrepresented. Though I once would have seen learning coding on my own as nerve-wracking, BTNY taught me to take “positive risks” and strengthen my skill-set. They connected me with my sophomore year mentor Danny who told me about his monumental experiences at Columbia which heavily influenced my decision to go to its sister school Barnard College in the fall.

When I think of Breakthrough, I think of the early step into the professional world that had from a young age. I think of the hands I shook, the elevator pitches I prepared, and the power of mentorship. Breakthrough empowered me to enter spaces solo and fueled me to take the leaps of independence that led me to where I am today — for which I am forever grateful.