The Future and The Past by Fariha 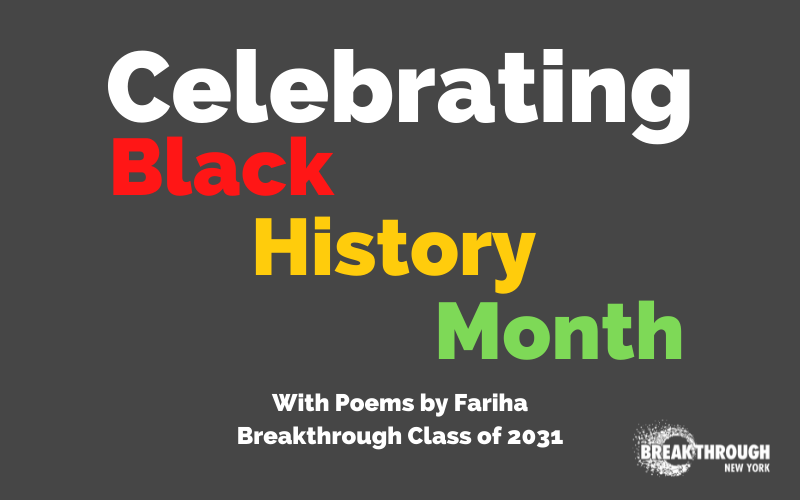 In honor of Black History Month, we asked our students to write a piece that demonstrates the personal significance of the holiday. 7th grader Fariha (Class of 2031) wrote a set of poems inspired by Black writers.

Black History Month is a really important month. It’s a month where we bring back and celebrate all the Black historians that impacted our lives. So, because of this awesome month, I decided to write a poem [dedicated] to African American historians/poets! I am in a program in school where we create shows relating to different topics, including Black history. For our upcoming Black history show, I made a poem. The organization of this poem is that I will take a part of an African American poet’s poem, and I will continue on with two of my own stanzas, a stanza using their past and a personal stanza. The two African American poets I chose were Maya Angelou and Paul Laurence Dunbar. The two poems I chose from them are “Still I Rise” by Maya Angelou and “Forever” by Paul Laurence Dunbar. I chose these two specific poems because they talk about the past and the future.

Still I Rise by Maya Angelou

“You may write me down in history
With your bitter, twisted lies,
You may trod me in the very dirt
But still, like dust, I’ll rise.

“Does my sassiness upset you?
Why are you beset with gloom?
‘Cause I walk like I’ve got oil wells
Pumping in my living room.

Still I’ll rise, Maya Angelou said, still I’ll rise.
She was an American poet, memoirist, and a civil rights activist, yes she was very wise.
In her past, she was strong, getting traumatized by getting raped, she deserved more than one prize. But then, she made poems about her feelings, so that they won’t be in disguise.

Same with me, everyone has their lows and highs. As Maya said, it’s because of everyone’s bitter twisted lies. All the hateful ones around me, make me want to ignore and close my eyes. But, “still I’ll rise.”
——————————————————
Forever by Paul Laurence Dunbar

“I had not known before
Forever was so long a word.
The slow stroke of the clock of time
I had not heard.

“’Tis hard to learn so late;
It seems no sad heart really learns,
But hopes and trusts and doubts and fears,
And bleeds and burns.

“The night is not all dark,
Nor is the day all it seems,
But each may bring me this relief-
My dreams and dreams.

“I had not known before
That Never was so sad a word,
So wrap me in forgetfulness-
I have not heard.”

Paul Laurence Dunbar didn’t know words can cause such a frown. But, at least he died still wearing his crown, just like his dad who escaped from slavery. He didn’t like the fact that white people wanted him to drown. When Dunbar was young, everyone already knew he was good with words. That’s why in one of his poems, he talks about free birds.

Why are there so many negative sayings and words? Negative people should be targeted on boards. They make me want to hide and cry. But, I ignore and still rise high, “forever.”