Bridging Communities Near and Far 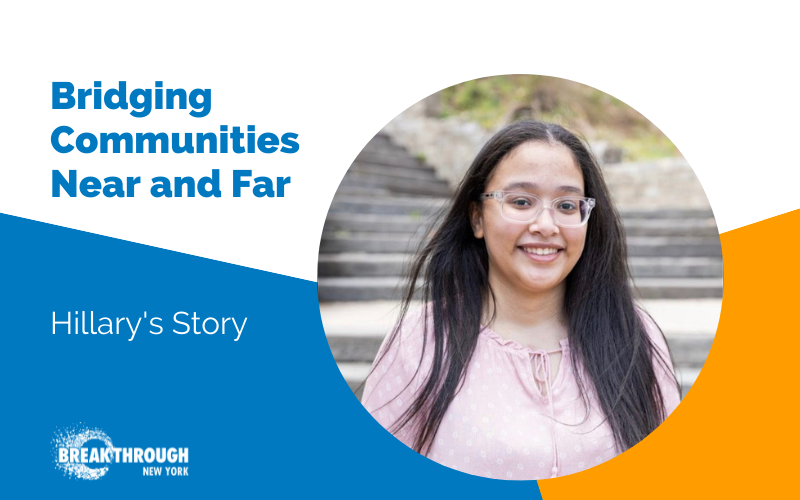 Hillary (Class of 2025) is a freshman at Tufts University studying psychology and community health. She shares her story with the hope of inspiring other Breakthrough students to take chances and uplift others along the way.

What is community? For some, it means the neighborhood they live in. For Hillary, it is a place that she can call her second home, where everyone looks out for and supports each other. It was this idea of trust and togetherness that persuaded her to apply to Breakthrough New York seven years ago.

Throughout years of summer classes (and early mornings) Hillary exercised her love of learning while getting to know her Breakthrough peers and staff, many of whom she is close with to this day. Getting a head start on her education taught Hillary necessary time management and study skills. She also built up her sense of self that was equally important to bring with her to Tufts University, where she is double majoring in psychology and community health.

As a person of color attending a predominantly white institution, Hillary initially experienced impostor syndrome—the feeling of doubt or that she did not deserve to be there despite earning her seat. She overcame this challenge by remembering the values that Breakthrough instilled upon her.

“Breakthrough always pushes those ideals of believing in yourself and knowing that you’re going to succeed,” Hillary says. “[You] made it here and you should be proud of yourself. Don’t let the environment slow you down.” Hillary sought out resources on campus like identity centers, where she made friends with other first-generation college students to lean on for support.

An ambitious freshman, Hillary is already making strides towards improving community health with Project SHARE, an organization that focuses on public health initiatives in the towns surrounding Tufts. She practices her advocacy skills to bring awareness to the importance of having diverse food options distributed through pantries. Providing food that is culturally relevant, Hillary explains, will increase the usefulness and sustainability of emergency food plans and also decrease waste from discarding unwanted items.

These changes have a positive social and racial equity impact on communities as well. “It shows the populations that the city does care about them [and] wants them to know that this is their home,” Hillary says.

Being a New Yorker, Hillary never strays too far from the community where she grew up. This summer, she returns to Breakthrough New York as a teaching fellow. She felt motivated to not only teach the next generation of Breakthrough students, but to mentor them as well. “I thought it’d be a great way to give back and show [the students] that I am one of them, and I’ve made it this far,” she remarks.

Hillary concludes with some advice for the soon-to-be college freshmen. “Have fun in college! These are the next four years of your life. Make it count any way you can.”