Women Are Not A Monolith 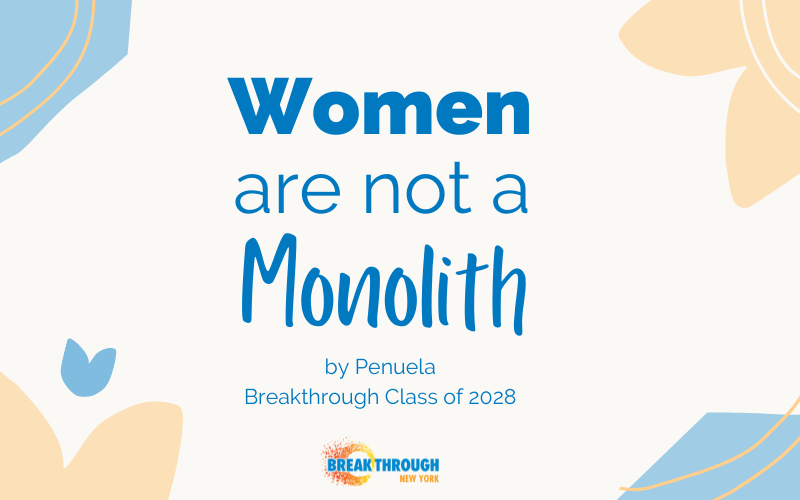 During Women’s History Month, Breakthrough New York is recognizing the issues that are important to our community surrounding women and gender. Penuela (Class of 2028) urges others to understand the multitude of identities and experiences of women when they consider the meaning of feminism.

Women. Women. Women. A group of people whose impact on the world has been huge, but its recognition hasn’t always been as huge. The society we live in today has always and continues to center around men. Their ideas, voices, and impact have been seen as better than a woman’s. Our society must value women’s voices and amplify them during Women’s History Month and beyond. This month is a month of undoing and unsilencing the voice of women all over the world, of diverse backgrounds. Though women have been able to achieve and impact society, the struggle to get there needs to be discussed more. The pay gap, catcalling, access to opportunities, misogyny, and much more. These experiences that almost all women go through are heightened depending on the other identities women carry. Race, sexuality, ethnicity, socio-economic status, family structures, ability, religion, and age are all other identities that add to the experience of women.

With feminism, there have been three waves. The first wave from 1850 to 1920 was focused on representation, patriarchy, and allowing women to vote. The second wave, started in 1920, focused on sex versus gender. Third wave feminism from the 1980s to now has been focused on gender violence, intersectionality, sexuality, beauty standards, and queer identities. Throughout all these waves, the focus has been primarily on white women, excluding women of color like myself for feeling like a part of feminism. In 1989, a Black woman named Kimberle Crenshaw coined the term intersectionality, specifically in the context of the experience of Black women as racially and gender oppressed people. She discussed Black men and white women not fully involving Black women in their fight for equality. Historically and currently, the way women are taught to the world isn’t holistic. But to truly appreciate women, that means appreciating all types of women and realizing the different experiences different types of women go through. Some examples of these differences are that Black women are four times more likely to die from childbirth than white women. LGBTQ women are more likely than straight women to get diabetes, and Indigenous women were the last racial group of women allowed to vote.

These examples show us that the women who carry identities with the most oppression should be at the front of the feminism movement. Personally, the whiteness centered around feminism has negatively affected me. White people and Eurocentric features are the standard. Though I am confident in my beauty, at times I notice it is difficult for me to feel feminine in comparison to the white girls at my predominantly white institution (PWI). Womanism, which is the study of how Black women navigate the world, has helped me feel empowered, which I want all women to feel.

To allow women to feel empowered at all times, they need to see themselves in the environments that they are in. What do I mean by that? I mean young girls in schools seeing teachers and faculty members who look like them. When young girls go to the doctor, they need to see people who look like them. When I went to the doctor’s [office], I loved seeing women with dark skin and afros just like myself. At my middle school, which was more diverse compared to my current high school, almost all the teachers were women of color. This means that representation is so important because it shapes how a woman can see themselves. Society needs to give different types of women a seat at the table. When women are given a seat at the table, they can accomplish more than society expected them to. So for this Women’s History Month and beyond, realize women are not a monolith. We will not all be treated the same, simply because we are women. Representation matters.