An Interview with Alum Andrew Jyan 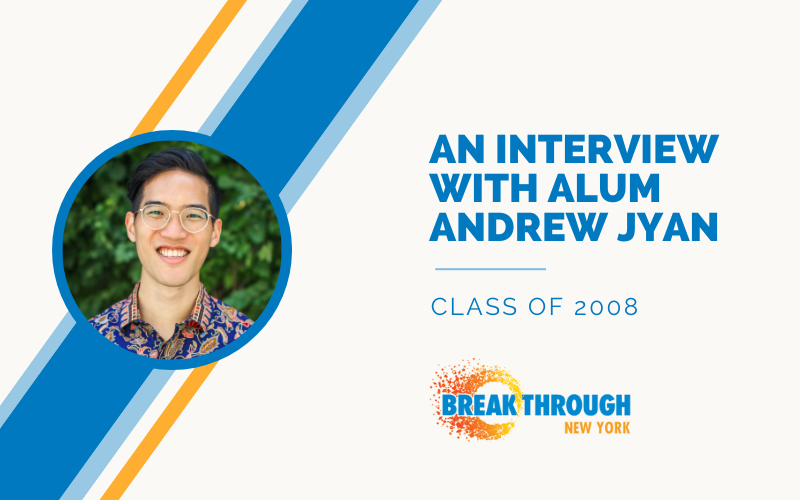 Andrew Jyan (Stony Brook University, Class of 2008) graduated from Breakthrough New York when it only served students through middle school. Although he attended for just two years, he recounts fond memories and the impact Breakthrough had on him through his academic career.

What was it like going through the middle school program?

What I really liked about my summer programs at Breakthrough was the expansive education that I got. For example, I had never really been exposed to African-American or Latino culture before Breakthrough, and I was learning a lot about Black history, and the struggles in the country. That really helped me appreciate diversity. What I appreciate a lot was from a pretty young age, being exposed to things that were outside of my comfort zone.

What kind of impact did that have on you through high school and college?

Breakthrough was also pivotal in the reason I ended up going to a boarding school called the Episcopal in Virginia, rather than Bronx Science. I figured my entire middle school career was like, I have a straight path that I know I want to be on: do really well in math and science classes, go to Bronx Science with my friends. The high school program director at the time, Michaela, said she wanted to explore the possibility of me going to a boarding school or a private school instead, just to see what that would be like.

At the time I was kind of against it; I don’t have any friends there, I don’t really relate to any of the cultural norms there. Keeping an open mindset was probably the most important thing that I had to do my first year, and I didn’t do that. Over time, realizing that keeping an open mind, that people come from different backgrounds, and they just don’t see the world that you necessarily see [is something] that Breakthrough really helped a lot with.

What was your favorite part about being at Breakthrough?

I didn’t realize just how much the staff actually deeply cared about us as students. There are definitely times where teachers would pull me aside [for] nothing school-related; rather, it was just checking in on me, just seeing how I was doing. Michaela, after the program was over, would invite my mom to sit down, and they would just talk for hours about my future, and my brother’s future, who wasn’t even in the program. Just giving her an idea of options in terms of educational pathways forward.

What do you do for a living now, and how did you get there?

I’m a software engineer at a startup. I started out as an analyst at AIG, which is a multinational insurance firm. After a few years there, I realized I really liked working with technology, so I wanted to pursue that as a career instead. I ended up teaching myself a little bit of web development and going to a coding boot camp.

I ended up quitting my job right before the pandemic. I’m really grateful that it happened when it did, because I think if I were at AIG during the pandemic, then I probably would have stayed out of fear of wanting to have some sort of security. But I figured, if I’m going to take a bet, I might as well take a bet on myself. Overall, I really enjoy this line of work because it subscribes me to a lifelong journey of, “I have to learn.” If I don’t keep up to date with technology, then my skills become irrelevant.

What’s one accomplishment that you’re really proud of?

I remember during my graduation [from Breakthrough] we had a nice dinner, and Rhea, the executive director at the time, was passing around the microphone saying, “Do you want to say a few words?” She hands me the microphone, and I just froze. I didn’t know what to say, and I didn’t know what to do. When you’re standing in front of a crowd waiting for you to speak, that was such a unique feeling that stuck with me.

Fast forward to boarding school. Every Friday, the chapel service is led by members of the student body. I volunteered to give a talk in front of my whole school once, and it was honestly terrifying. As I kept      going, it got a lot easier, and I actually really learned to enjoy public speaking.

Once I graduated college, I joined Toastmasters, which is an international public speaking competition. I’ve won third place two times at the district level, and I’ve won first place three times at the regional level. That’s something that I’m really proud of, having gone from a fourteen-year-old that can’t say a single word in front of a microphone, and I’m in front of a couple of hundred [people] giving a speech. And it’s fun!

Connect with Andrew on LinkedIn.