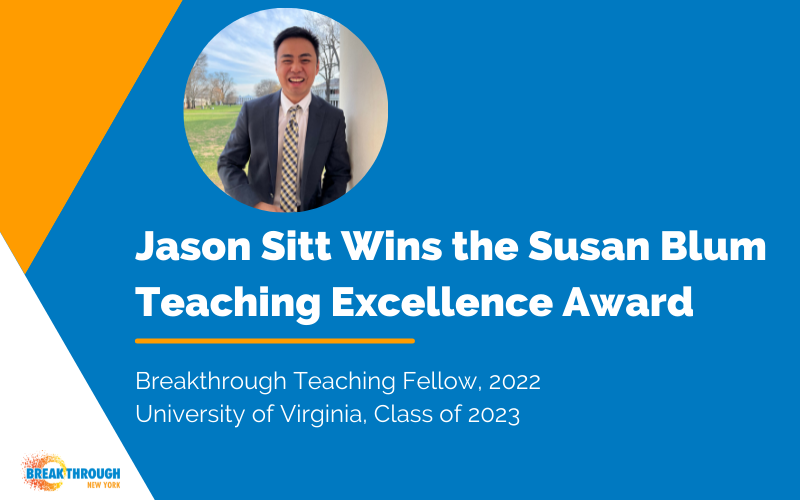 Jason Sitt is a recipient of this year’s Susan Blum Teaching Excellence Award. He is a senior at the University of Virginia who is majoring in Biology and Spanish and minoring in Anthropology. He taught 7th grade science as well as a dance elective during his summer Teaching Fellowship.

Jason always had an interest in teaching. At the college level, he has experience as an ESL teaching assistant, lab assistant, and tutor. His role as a Teaching Fellow was an introduction to working with students in grades K-12. It opened up the possibility of teaching middle school in the future.

Teaching Fellows collaborate closely with their peers and instructional coaches, who are licensed teachers who guide Fellows through their lesson plans. Jason benefited greatly from a community where so many are dedicated to education reform. Hearing other people’s opinions helped shape his philosophy on education. “In order to get to a point where we are collectively happy about education, we have to [do] things that have not been in the system for a long time,” he explains.

Jason uses the example of managing students’ so-called “disruptive” behavior. “Am I behaviorally managing them because they are disruptive? Or maybe they are just expressing themselves in a way they want to over something that [is] unfair to them,” he comments. He suggests an alternative method of having students write their thoughts in a notebook whenever they want to share an idea; the teacher would then read the notes later and comment back to the student. This tactic would allow every student to voice their opinions in a specific way.

A New Approach to Science Education

The idea of trying something different in the classroom helped Jason develop a new approach to science education. Instead of just focusing on pure content and facts, he believes science education should focus on applying the scientific method to real-life scenarios. “When it comes to science, you could figure it out – that’s the whole journey of science,” Jason says.

Jason witnessed this in action by having his class conduct an experiment with bacteria. Students swabbed various surfaces and watched what kind of bacteria grew on a plate. It was a memorable moment for Jason to see his students so engaged in scientific discovery. “The excitement on their faces was so unforgettable,” he remembers. “The further I went from testing and what traditional ‘American education’ has been, the more enjoyment my students were having.”

Jason will continue to explore his interests as he finishes his senior year. He serves as the president of the Alzheimer’s Foundation at UVA and interns at a research lab at the university hospital. He is considering teaching abroad, education research, or education technology as future career paths.

Even if he does not end up as a science teacher, this Teaching Fellow experience gave Jason skills that he can apply to any profession. “Learning about yourself is always a great thing,” he remarks. “Especially giving instructions as a leader, and I think a lot of people want to become leaders in some capacity.”